While I was teaching at the university in Hong Kong, I would have some off hours, before and after teaching my class. On my first day of class, my colleagues asked me if I planned to see any sights during the free time. I had heard about the flag raising ceremony at the Golden Bauhinia Square, and I named that as one of the Things To Do in Hong Kong.

To my surprise, my colleagues said that even they were not aware of such a daily event. We agreed that the Golden Bauhinia is quite a sight to behold, and I should go take a look. So, off I went during one of the mornings, before breakfast, because the flag raising ceremony was early in the morning. 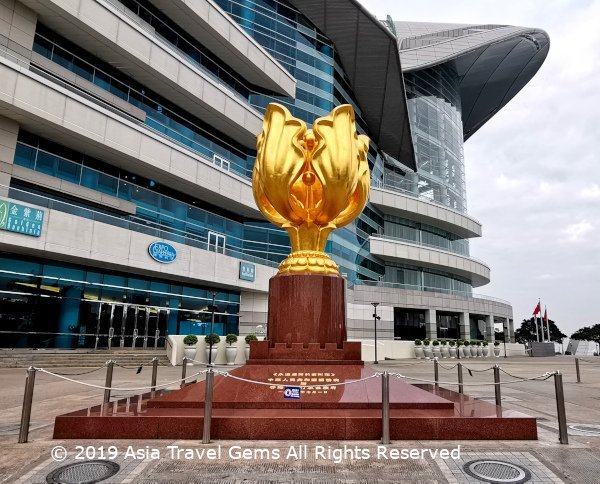 The lovely Forever Flowering Bauhinia Sculpture and the Flag Raising Ceremony against the magnificent backdrop of the Victoria Harbour is worth a visit when you are in Hong Kong.

The Golden Bauhinia is located right next to one of the shores of Victoria Harbor. In this video, you will see the magnificent beauty of the waters, the pathway along the shore where people walk, jog and exercise, the awesome and huge Gold Bauhinia statue as well as the very cool flag raising ceremony by the lovely Hong Kong policewomen.

I had it all planned out. The Flag Raising Ceremony would commenced at 7.50 am sharp. According to Google Map, it would take about 20 minutes from Butterfly on Morrison, where I was staying at, to the square by foot.

So, the plan was to wake at 6.30 am. Get ready by 7.20 am. Then walk to the Golden Bauhinia Square in time for the flag raising ceremony. After that, I would have time to explore the area a little bit before going for a delicious and nutritious breakfast at The Flying Pan.

Boy, was I wrong. haha

My first advice – Do not trust Google Maps so much. The suggested route was not an easy journey. It was also a less scenic route. I had to climb up and down lots of steps. And navigate alongside a huge construction site.

It was only after the ceremony and exploration of what was around the convention and exhibition centre, when I was navigating from the square to The Flying Pan that I realized that there is a better way to get to this popular attraction.

Travel Tip: See the How To Get to Golden Bauhinia Square info (further down this article)

Do not repeat my mistake. Go to the How to Get to Golden Bauhinia Square section below. There is an easier way to reach this place.

Due to the misleading info from Google Maps, I had to hurry my steps. I did not want to miss the flag raising ceremony. As I hurried to be on time, I thought back about my research on this famous attraction. See the next section to read about what I discovered about this interesting site.

The Golden Bauhinia Square is named after the brilliant giant statue of a golden Bauhinia Blakeana that is placed here. It is located in an open area in Wan Chai, Hong Kong Island, just outside of the Hong Kong Convention and Exhibition Centre.

The bauhinia is the emblem of Hong Kong. Here is a photo of the flower.

It looks familiar to me. There are small trees near my home with such flowers. Do they look like Bauhinia to you?

The sculpture at this square is six metres high. It is called the Forever Blooming Bauhinia Sculpture. It was a gift from the Central Government to mark the 1997 Handover as a symbol of reunification.

This attraction is very popular with Chinese visitors. The statue has inscriptions of the calligraphy of President Jiang Zemin. He was the China representative at the Handover Ceremony.

One of the reasons I decided to visit this place of interest is also because of the flag raising ceremony. It is conducted every day by the Hong Kong Police Force. I simply enjoyed the pomp and grandeur of this event. Plus it is done against the beautiful Victoria Harbor as a backdrop.

Travel Tip: Do Take Note – The Flag Raising Ceremony is conducted every day except the first day of each month

Travel Tip: Be there at least 10 minutes before. They start on time!

I would advise you to be there at least 10 minutes earlier. I somehow managed to arrive there much earlier. And was able to go about capturing photos and videos of the sights around this place.

As you can see from the photos, the officers are in their uniform. You may not be able to hear it in the video, but there is the national anthem being played during this event.

There is also the enhanced flag raising ceremony. This is done on the first day of every month. It starts at 7.45 am and ends at 8.13 am.

There is more time allocated for this special ceremony because there will also be a 10-minute musical performance by the Police Pipe Band. They also play the national anthem instead of a recorded playback.

Another unique feature of this special event is that the rifle unit will accompany the officers during the ceremony.

This is another version of this ceremony, and it is held on the first day of July and October.

Travel Tip: The Flag Raising Ceremony may be cancelled at any time due to bad weather conditions. Check with your hotel concierge before visiting this site.

When I researched about this attraction, I read all the information with interest. And looked at all the photos and videos with fascination. It must be so cool to watch the ceremony and look at the Golden Bauhinia statue first hand.

And I was so right. I enjoyed every moment.

The statue was so beautiful to behold. No photo or video can replace seeing it in real life. The gold colors are breathtaking. And the size and importance of it is awesome.

Reading Tip: Watch the video to see all the action

I especially appreciated the officers performing the ceremony. You can see they take such pride in doing it. When I was there, their family and friends were there to support them.

You can see how proud the parents were. And friends were smiling with such joy for their friends who are the officers, who have been specially selected for this role and event.

Nothing beats being there and seeing all that. I highly recommend waking a little early, and taking time to experience all this at the Golden Bauhinia Square.

Where is Golden Bauhinia Square?

As mentioned earlier, the Golden Bauhinia Square is located at the open space outside the Hong Kong Convention and Exhibition Centre (HKCEC). I didn’t really notice this fact earlier when I decided to visit this site. Had I been more observant, I would have made my way to the centre, and my journey would have been more pleasant.

Here is a map showing where this square is located. After the map, I have provided info about the Hong Kong Convention and Exhibition Centre (HKCEC).

What is the Hong Kong Convention and Exhibition Centre (HKCEC)?

Fans of the famous Hong Kong actor, Jackie Chan, will remember this building. It was the setting for the dramatic grand finale of his popular movie, New Police Story. And no wonder they chose this centre.

It has a vast curtain of glass. The 40,000 square metre aluminium roof is created to echo a seabird soaring in flight. As such, it is a major landmark on the Hong Kong Island skyline.

It is also known internationally as a world class convention and exhibition centre. To its credit, it has been voted Best Convention and Exhibition Centre in Asia 13 times by industry awards.

Travel Tip: Have fun at this site. Check out the Ani-Com Park @ Harbour Fun

Near the Golden Bauhinia statue, and also outside the centre, there is the Ani-Com Park@Harbour Fun. You can find life like statues of popular local comic characters here.

As the statue is outside the Hong Kong Convention and Exhibition Centre, it is literally open 24 hours, and 7 days a week.

More importantly, note the flag raising ceremony (hours given above).

How to Get to Golden Bauhinia Square?

In Hong Kong, one of the best ways to get to famous attractions is by MTR. This place is no exception. Take the MTR to the Wan Chai Station. Then go to Exit A5.

Walk along the footbridge of O’Brien Road. Then pass through the Immigration Tower and Central Plaza to get to the Hong Kong Convention and Exhibition Centre.

Take the bus to the Hong Kong Convention and Exhibition Centre, and then walk north to the square.

Taxis are easy to catch in Hong Kong. You can get one to bring you direct to the Golden Bauhinia Square. For more information about Taxis and Grab, go to my page about Hong Kong.

If you are staying at a hotel that is near to this site, just like me, you can walk over here. Simply ask your hotel concierge for directions to the Hong Kong Convention and Exhibition Centre.

Travel Tip: Don’t make the same mistake that I did and use Google Map or ask for directions to the Golden Bauhinia Square. It is better to aim for the Hong Kong Convention and Exhibition Centre.

If you have ANY questions about this post – Things To Do in Hong Kong – Golden Bauhinia Square, or Hong Kong, ANY at all, please submit your questions as comments below. I will be happy to help you out.

Things To Do in Hong Kong – Wisdom Path

Things To Do in Hong Kong – Avenue of Comic Stars