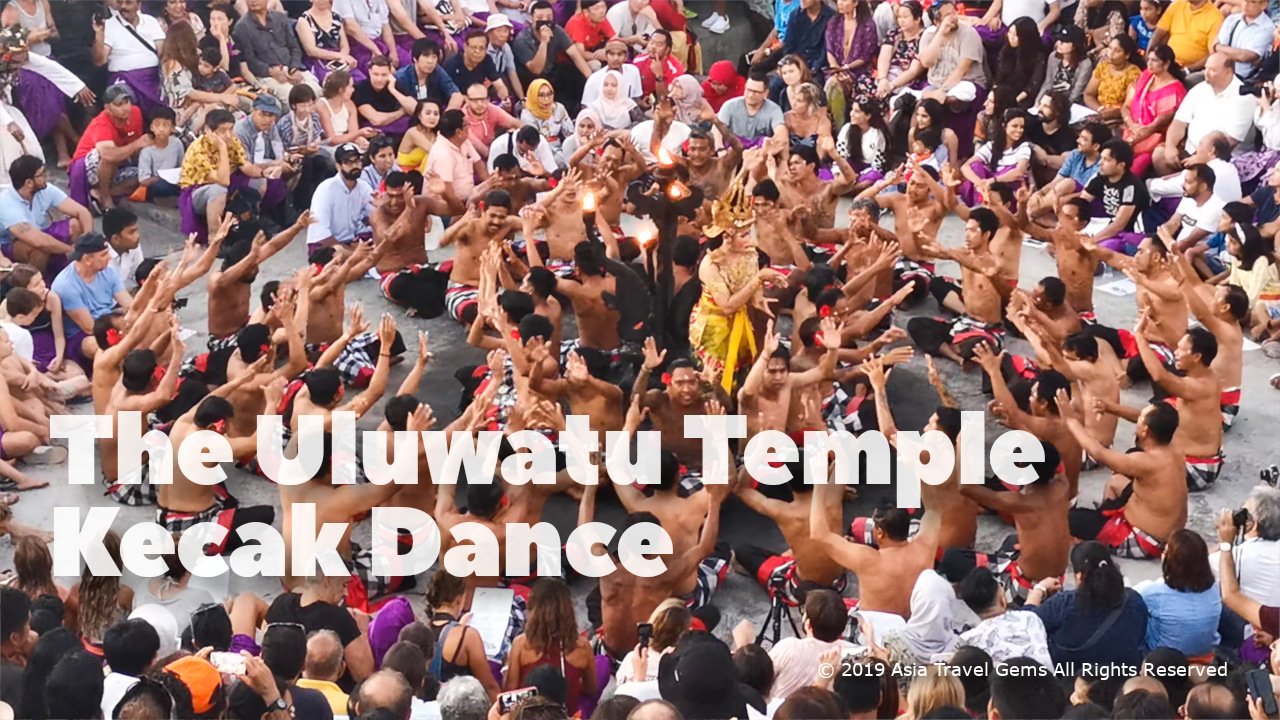 When you visit The Uluwatu Temple, you must buy a ticket and watch The Uluwatu Temple Kecak Dance. That was what our private tour guide told us, and he was so right! Set against the sun setting into the Indian Ocean, the performance was one of the most memorable sights during our Bali vacation.

When we reached the temple grounds, our kind and helpful tour guide joined the long queue to buy us tickets. Eventually, it took him slightly over an hour to get the tickets to the show!

During that time, we enjoyed the awesome view of the cliff, the Indian Ocean, and the sight of the temple at the edge of a steep cliff. We were so grateful for our tour guide who queued and gave us the time to take lots of great photos and videos. Lots of magnificent scenery and beautiful memories. It is truly one of the Best Places to Visit in Bali.

Soon enough, it was time to enter the amphitheater, and be thrilled by the Kecak Dance performance. Below is the video of their enchanting chants and dance. 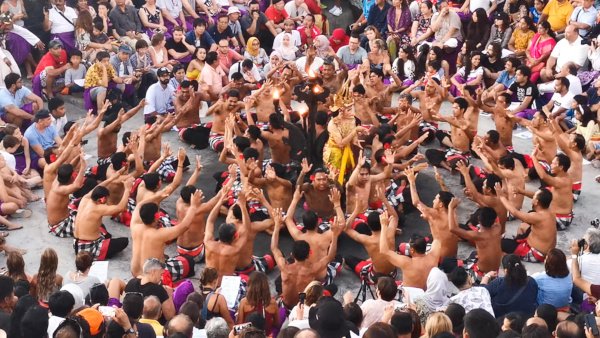 Watch The Uluwatu Temple Kecak Dance set against the backdrop of the famous temple, the vast and magnificent Indian Ocean, and one of the most breath taking sunset in Bali, Indonesia.

As the sun sets, the dancers enter the stage with their arms raised and chants of ‘Kecak’ repeatedly. It was mesmerizing. The entire performance told of the story of the Ramayana epic. Colorful characters from the story joined the performance, and the audience were watching in silence, totally absorbed. Watch the video to see it all.

What Is The Kecak Dance?

Before I visited Bali, I had no idea what the Kecak Dance was all about. Then I watched this cultural delight at The Uluwatu Temple, and I was mesmerized!

Of course, I had to find out what this is all about, right? And I did.

It is a very unique Balinese dance. The special part of it is that the dance is not accompanied by any musical instrument or gamelan. Note – a gamelan is the traditional music that is created using percussive instruments.

As I sat in the audience, I was enraptured by the choir of 70 men as they raised their arms and sang ‘Kecak’. At certain parts of the performance, the 70 men got up and did the traditional dances.

I have also found out that traditionally, the sacred dance, also known as Sang Hyang, was performed with one of the dancers possessed by the spirits. This dancer was then able to communicate with the Gods or ancestors, and delivered their messages. (Don’t worry, this did not happen during The Uluwatu Kecak Dance performance)

Interestingly enough, some time in the 1930s, the story of the Ramayana epic was incorporated into the dance. I felt that the story made the dance more engaging.

What Is The Uluwatu Temple Kecak Dance About?

The performance of The Uluwatu Temple Kecak Dance was about the Ramayana epic. It started with the conspiracy of Dewi Kakayi, who was the stepmother of Sri Rama. Because of that conspiracy, Sri Rama, the legitimate crown prince of the kingdo of Ayohdya, was exiled from his father’s palace, the Prabu Dasarata.

Together with his younger brother, Laksamana, and his loyal wife, Dewi Sinta, Sri Rama entered the Dandaka Forest. There, there were discovered by Prabu Dasamuka (also known as Rahwana). The latter was a despotic king. Immediately, he was captivated by the beauty of Dewi Sinta.

His lust caused him to make an attempt to kidnap Sinta. His servant, Marica, assisted him to achieve that. First, they separated Sinta from Rama and Laksamana. Then they kidnapped Sinta and took her away to Alengka Pura.

Of course, upon finding out what happened, Rama and Laksamana tried to rescue Sinta. With the help of the ape army that was under the comman of Hanoman, they succeeded in defeating Rama’s army. Sinta returend to Rama safely.

That was the story from the Ramayana epic that was told during the Kecak Dance performance. Awesome, wasn’t it? There was palace intrigue, battle, and romance.

The Kecak Dance performance was delivered with four dramatic scenes:

Rama, Sinta and Laksamana entered the stage. The Golden Deer came, and Sinta asked Rama to arrest him. Rama left to do as Sinta wanted, with Laksamana left to guard her. Suddenly, there was a scream for help.

Worried, Sinta felt it must be Rama. She told Laksamana to help him. Laksamana wanted to help Rama, but was reluctant because he remembered Rama’s order to stay and protect Sinta.

He was then accused of benefiting should Rama die. Faced with such accusation, Laksamana ignored the order, and left Sinta alone.

In scene 2, Rahwana made his attempt to kidnap Sinta. But he failed.

Using his magic tricks, he transformed into a Bhagawan (an old man), and approached Sinta. He said he was thirsty, and asked her for water. Sinta, with her good and generous heart, gave him water.

At that moment of her weakness, Rahwana (disguised as the Bhagawan) took her away. Sinta screamed for help. Her screams were heard by a Garuda that was flying by. A Garuda is a large bird.

Then the Garuda helped Sinta. But its attempt was unsuccessful because Rahwana cut off it wings. Sinta was then taken away to Alengka Pura by Rahwana

In the next scene, we see Sinta lamenting her fate to Trijata, Rahwana’s nephew. Suddenly, Hanoman (the White Ape) showed up, and he said that he was the envoy of the Rama. He showed Rama’s ring as proof.

Sinta then handed over some flowers to be handed over to Rama, with the message of asking Rama to rescue her immediately. Hanoman immediately went to Alengka Pura’s garden, and then he ruined it.

The servants of Alengka Pura were surprised by the damage done by Hanoman. They immediately ordered the giants to find the troublemaker. Soon, Hanoman was captured. He was tied and burned. But because of his power, Hanoman managed to escape safely.

In the final scene, Tualen, a servant from Sugriwa, the King of the Red Ape, came to Alengka Pura to help Rama to take Sinta away from Rahwana. Knowing this, Rahwana was angry. A fierce battle ensued between Sugriwa and Rahwana.

At the right time, Hanoman, Rama and Laksamana arrived with the magic of Rama’s arrow. They defeated Rahwana. Hanoman jumped forward to take the head of Rahwana so he would not fall to the ground.

Finally, Rahwana died, and Rama and Sinta were reunited.

Cool story, right? It was even better to watch it told through The Uluwatu Kecak Dance performance.

There is no doubt about it. You really must watch this awesome dance performance. It is rich in heritage and culture. Plus, its unique venue makes this a once in a lifetime experience.

I give The Uluwatu Kecak Dance performance a Thumbs Up!

As the crowd arrived, I could sense the anticipation building. The first thing everyone was looking out for was the sunset. It was truly a sight to behold.

The amphitheater was built at an elevated level such that everyone could enjoy the vast and magnificent Indian Ocean view. As we sat and basked in the rays of the setting sun, it was so peaceful to immerse in that world.

Then as the sun set, you could see people taking photos. No one was going to miss this picture perfect moment.

As soon as the sun began to set, the Kecak Dance performance began. From the second I heard the cries of ‘Kecak’ as the dancers gathered just outside the amphitheater, to the moment I left, it was a magical experience. Do watch the video to see what I mean.

I truly and highly recommend that you watch The Uluwatu Kecak Dance performance.

Where is The Uluwatu Temple Kecak Dance?

To watch The Uluwatu Kecak Dance, you must go to The Uluwatu Temple. The temple is located at the far south of Bali, Indonesia.

What is The Showtime for The Uluwatu Temple Kecak Dance?

While The Uluwatu Temple operates from 9 am to 6 pm, the performance begins as soon as the sun sets. This can be any time from 6 pm to 7 pm.

Travel Tip – Arrive early to get the best seats

As soon as it is 6 pm, do make your way to the amphitheater, and find good seats. You may be early, and have to bear the heat from the setting sun. But trust me, it is better than arriving late, and trying to find a row of seats so that you can sit together.

What is the Address of The Uluwatu Temple?

What is the Ticket Price for The Uluwatu Temple Kecak Dance?

How to Get to The Uluwatu Temple Kecak Dance?

The performance is held at the amphitheater within The Uluwatu Temple. So, you need to get to the temple.

There are no mass rapid transit trains in Bali. So, no train service to The Uluwatu Temple. Better to take taxi or get a tour guide. See below.

I understand that there are no buses to The Uluwatu Temple.

As mentioned above, The Uluwatu Temple is really far south of the island. So, if you choose to take the taxi, make sure you have a way back to your hotel or villa. Once again, BlueBird taxis are reliable. You can try to ask for meter. But be prepared to bargain for a fixed rate before you get into a cab.

This is like Uber. Read more about this and other choices of transport in my Indonesia article. My advise – do not choose this option when going to The Uluwatu Temple.

It is best to hire a private driver and tour guide. He can plan the best itinerary for you. He can help you know what time to arrive so that you have enough time to tour the temple and grounds as well as be on time for the show.

He can and will even queue for over an hour to get the tickets for you while you explore the site. If you need a private driver and tour guide, please contact me. I can connect you to him.

In Bali, you can rent a scooter or motorcycle at a very cheap price. But I do not recommend this. It is dangerous. Many tourists and locals have lost their lives because of this mode of transport.

If you ever choose this, please wear a helmet. Be safe.

Sure. If your hotel is nearby, and within walking distance. Otherwise, best to go by taxi, Grab or private driver.

Going to Bali? Book Your Hotel Room, Resort or Villa with Our Best Partner and Get The Best Rates

If you have ANY questions about this post – The Uluwatu Temple Kecak Dance, ANY at all, please submit your questions as comments below. I will be happy to help you out.

Best Places To Visit in Bali