Notice: Trying to access array offset on value of type bool in /var/www/volumes/xvdl/vhosts/asiatravelgems.com/httpdocs/wp-content/plugins/kraken-image-optimizer-/kraken.php on line 50 Things To Do In Kuala Lumpur - Getting To Batu Caves - Asia Travel Gems
Skip to content 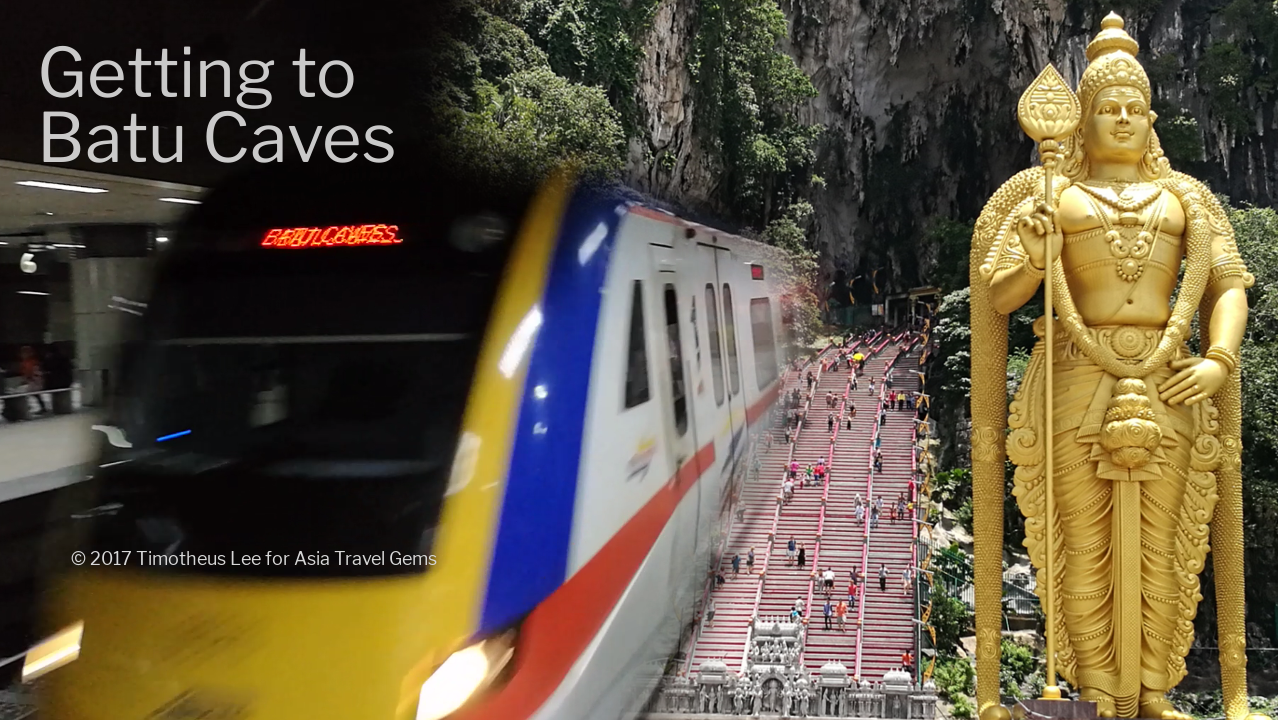 There are many ways of Getting To Batu Caves, which is one of the Things To Do In Kuala Lumpur. You can get there by car, taxi, bus or via train. We traveled from KLCC to Batu Caves using the train system in Kuala Lumpur.

Batu Caves is one of the icons of Malaysia and a very popular tourist attraction. You can read more about it in our blog post – Batu Caves.

Let’s start the journey, shall we? We began by taking the LRT from KLCC station that was at Petronas Twin Towers / Suria KLCC to KL Sentral station. Then switched to KTM Komuter line (the blue line) to travel from KL Sentral station to Batu Caves station.

In all it took us about 80 minutes because there was some time taken to find the entrances to the right lines, locate the ticket counter, understand how to pay for the tickets, etc. If you are familiar with all that, the trip should be shorter, about 60 minutes.

Along the entire route, we took photos and videos. Watch the video below to see how we traveled to Batu Caves from KLCC. Remember to turn on the subtitles for more detailed information.

The Malaysian train system is quite efficient and can get you to many places of interest around Kuala Lumpur as well as from Kuala Lumpur to well known sites such as Batu Caves. We started at the KLCC station.

Some parts of the train line is above ground, and some are under ground. The route from KLCC station to KL Sentral station is underground. As such, we took the escalator down and walked along a pathway to the station control area.

Tip: Make sure you are at the right station. See the station name. In this case it is KJ10 KLCC.

There was a map of the train system next to the ticketing machines. Locate that map to see how to travel from one station to another.

We found out that KJ10 KLCC station was along the LRT Laluan Kelana Jaya line (Line 5, the red line).

To go to Batu Caves, we needed to go to KL Sentral station, and switch to the blue line that was the KTM Komuter line. That train would take us all the way to Batu Caves station, which was the last stop for that line.

With that planned route in mind, we headed to the ticketing machines that were nearby. These machines are for commuters to buy tickets for travel from one station to another.

Do note that Only Cash is accepted, there is no credit card or any other form of card payment for the tickets.

Tip: Some ticketing machines only accept coins and MYR$1 and MYR$5. Get ready some small change!

And we are not mentioning the cost of the tickets because costs can change over time.

Buying the tickets was relatively easy. You just have to click on your choice of destination. In the next screen, you make sure you have chosen the correct destination, and select the number of tickets you require. If you need more, simply click on the ‘+’ button.

The total amount to be paid is displayed. Insert the cash (in notes or coins) into the respective slots. The tickets (in this case they were blue round chips) will drop out into the collection area. And you collect your tickets, and change, if any.

We used the tickets at the turnstiles, and entered the station. Then we got down to the platform using the escalator. And when the train arrived, we boarded the train.

Tip: Make sure you board the right train. Check the signages to see which side of the platform is the train to take to get to your stop.

The ride from KLCC station to KL Sentral station was quite short. It only took about 12 to 14 minutes. Again, depending on when your train arrived.

At KL Sentral station. we took the escalator to the ground level, and exit the station into KL Sentral, which is a huge shopping area with lots of cafes, restaurants and amenities.

But there was no time to shop. We wanted to get to Batu Caves as quickly as possible as we knew there was much to see there.

We looked around, and it was easy to spot the KTM Komuter ticket counter. There was a large sign hanging above the counter, and a line of people queuing to buy tickets.

We bought the tickets to travel on the KTM blue line from KL Sentral station to Batu Caves station. Then we entered the station and onto the platform to wait for the train that would take us there.

It was fun waiting for the train. There was a group of tourists from Japan. We knew they were Japanese because the tour guide was excitedly explaining to the group what to expect and what to do when the train arrived.

Tip: Look out for the electronic sign! It will inform you if the train that is coming is going to Batu Caves or not. And an estimated time of arrival. Don’t board the wrong train.

We waited only about 10 minutes. When the train arrived, it was very exciting. It came in really fast! (see the video to watch the excitement)

When the train stopped, there was the usual commotion and excitement as people alighted, and everyone that was waiting on the platform started to board.

When we boarded the train, we found the seating style to be similar to that of Singapore’s MRT (Mass Rapid Transit). That is, the seats were aligned to the walls of the train, and passengers faced one another.

But silly us! We were like the blind men who only saw parts of an elephant.

There were seats that were so comfortable with high back support. And the best part was that they faced the forward motion of the train. We loved it as we could watch scenes of the city through the windows when the train started to zoom above the ground.

Tip: There are designated cabins Only For Women. Do Not Sit in these cabins if you are male or couple. (see photo below) Kindly be respectful of others’ culture, please.

We Arrived at Batu Caves!

After about 35 to 40 minutes, we arrived at Batu Caves station! There was still a very short walk (about 5 minutes) to the actual Batu Caves. But hey, we loved how fast this trip was, and how economical too! Plus, we traveled in comfort.

We had a great time at Batu Caves. Again, we took lots of photos and videos.

To see them, go to our blog post titled – Batu Caves.

If you have ANY questions about this article, about Things To Do In Kuala Lumpur – Getting To Batu Caves, ANY at all, please submit your questions as comments below. I will be happy to help you out.

Things To Do In Kuala Lumpur – Batu Caves

Things To Do In Kuala Lumpur – Thean Hou Temple

Things To Do In Kuala Lumpur – Central Market